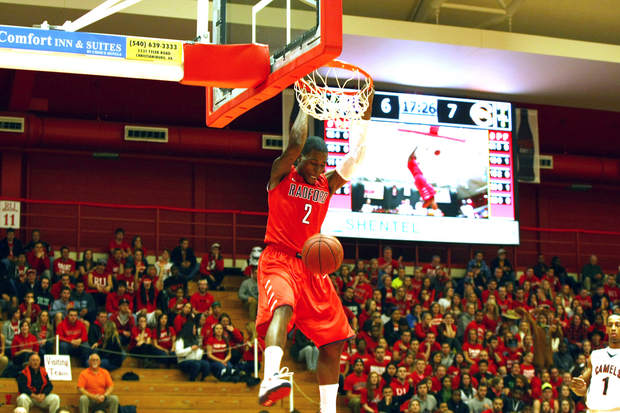 Javonte Green didn’t have a lot of opportunities if he wanted to play Division I basketball coming out of Brunswick High School in Virginia. Radford was the only school that offered him a Division I scholarship. Still, Green didn’t let that prevent him from making an impact right away for the Highlanders. He made his mark on the team immediately as a freshman, finishing second on the team in scoring and leading the team in rebounding and steals.

As a 6’4, 205 pound guard, Green would go on to lead the team in scoring, rebounding, and steals over his final three years at Radford, and he helped lead a team that won just 6 games his freshman year to back-to-back seasons of 22 wins in his junior and senior seasons. His senior year, Green averaged 15.4 points, 9 rebounds, and almost 2 steals per game, and he just graduated with a degree in Criminal Justice.

His college career behind him, Green had the chance to reflect on how he has changed during his college career. “During my time at Radford, I matured on and off the court,” said Green. “As a freshman, I was trying to do too much, and was forcing the game. I’ve become much better at learning to control the flow of the game.”

Green’s game may be a bit unorthodox for a 6’4 guard, but he believes he has some skills which will be valuable at the next level. “I think I have an advantage because of how I’ve made adjustments to different styles of play,” Green said. “I think my athleticism allows me to adjust easily to the game.”

Green is ready to focus on some important areas which will help him grow as a player and prepare him for the next level. “Right now, I need to work on improving my ballhandling and shooting,” explained Green, who only attempted 101 three-point shots in his four seasons. “Those two things are where I need to focus to take my game up to the next level.”

While Green understands that there are many challenges ahead of him to play at the pro level, he has a good idea how he’ll be able to contribute quickly wherever he plays. “I’ll do whatever my team needs me to do to win games,” said Green. “Whatever you put your mind to, you can do, so I if I put my mind to being a great role player, I can do that.”

Green knows his opportunity is out there and he has a lot to offer teams that give him a chance. “I’m a hard worker, and I know that hard work pays off,” Green said. “All I need is an opportunity and I can take it from there.”

After graduation, Green will train in Virginia and plans to get a wide spectrum of feedback. “I want to train with different teachers,” explained Green. “By working with different teachers, I believe that it would give me the opportunity to further develop my game and allow me to become a more versatile player because some people see different things, and I want to be the best player that I can be.”